Everybody loves punch. It’s fun, fruity and easy to drink. Best of all, where there’s punch there’s a party. I adapted this recipe from a cocktail my partner and I created back in my beverage catering days. It was always a big hit at events. Just like any well-made punch, it appeals to a variety of tastes. Unique enough to impress your guests, yet simple to prepare in advance, your friends will happily serve themselves a glass . . . or four. 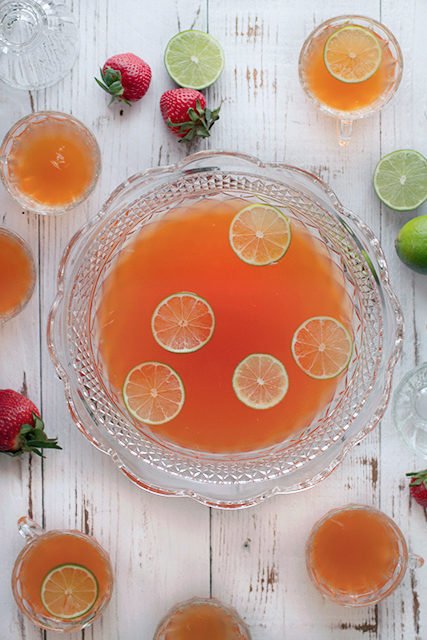 Everybody loves punch. It's fun, fruity and easy to drink. Unique enough to impress your guests, yet simple to prepare in advance, your friends will happily serve themselves a glass . . . or four.
Servings: 1 punch bowl

Hey there! Would this punch be ok to have in a drink dispenser? Or is it best served in a punch bowl?

OK, I made it. It’s in the refrigerator ready for Sat night party. Looks good….I hope it is!

The Pisco Sour is one of the most widely known Cocktail drinks of Peru !!!

PISCO is the Peruvian Grape eau-de-Vie obtained from the distillation of fresh spirits produced by the exclusive fermentation of grape musts (Grape juice), using traditional methods found in producing areas previously acknowledged and declared as such by the National legislation.

The only Pisco producing Areas are the Coasts of the Departments of Lima, Ica, Arequipa, and Moquegua, and in the valleys of : Locumba, Sama and Caplina in the Department of Tacna , ALL of them located in Peru !

Several chroniclers—including Guaman Poma de Ayala, Pedro Sarmiento de Gamboa, Martin de Murua, Bernabe Cobo and Pedro Cieza de Leon—provide evidences of the existence of this geographical reference in the early days of the Colony. Their documents also highlight the vine crops and the preparation of wines and eaux-de-vie in the area. Furthermore, Miguel Cabello de Balboa’s “ Miscellanea Antarctica ” of 1586 expressly mentions the valleys of Ica, Yumay and Pisco when describing the Peruvian southern coast.

The records of different chroniclers and other historical sources show that the combination of lands propitious for grape growing and the technical culture developed in the valleys of the Peruvian south created the pisco eau-de-vie in the 17th Century. In consequence, the history of Pisco is also a chapter on the culture-enriching mixing of races that we all embrace as part of our national identity, within Peru and abroad.

Since the early days of the Colony, in the coast of Peru there is a valley, a river, a port and a city called “ Pisco ”. The relationship between the pisco and the Peruvian geography and toponymy is, thus, undeniable. Today, the pisco eau-de-vie, Peruvian traditional drink and flagship product, introduces its long lineage and deep roots to the world.

The word “ Pisco ” has an UNDENIABLE Peruvian origin, as has been verified through studies made by lexicographers, chroniclers and historians. It is a Pre-Hispanic (Quechua) word meaning “ bird ”. (Juan de Arona, pseudonym of Pedro Paz Soldan y Unanue. Diccionario de Peruanismos [Dictionary of Peruvianisms], Volume II, Ediciones Peisa, Lima 1975, page. 323).

Precisely, the name of the valley was given by the Incas ( and not Diagitas or Manpuches ! ) themselves who were amazed by the large number and diversity of birds of the coastal region. They named the site “ Pisko ” ( located approximately 200 km south of Lima ), and the famous Paracas culture took place in this valley. However, this is not the only meaning of the word. A native community called “ Piskos ” had lived in the same region since ancient times. They were craftsmen par excellence who made beewax-lined earthen jars, among other items. The pitchers were used to store alcoholic drinks and chichas. Later, when the Spaniards brought grapes to the region, the famous local eau-de-vie was also stored in the pitchers and, over time, it acquired the name of its container.

Furthermore, it is worth mentioning that the word “ Pisco ” is contained within several names of Peruvian towns, regions and properties, such as Piscohuasi ( “ bird house ” ) in Ancash, Piscotuna ( “ bird fruit ” ) in Ayacucho, Piscopampa ( “ bird pampa ” ) in Arequipa, Piscobamba ( “ bird plain ” ) in Apurimac, among others. Likewise, the word can also be found in pure Peruvian surnames like Pisconte, Piscoya, Piscocolla, etc.

This is how they serve punch in Paradise, I believe!
Shiver-inducing, jaw-dropping beautiful images 🙂

looks amazing and i think it’ll be perfect for a bridal shower that i’m throwing this weekend! but question — how many does this recipe serve?

Hi Adair. Thanks for your comment and sorry for the delayed response. This recipe serves approximately 6-8 people, at about 3-4 punch glass sized servings per person. If you use larger glasses expect 1-2 servings each, for 6-8 people.

we had a party at the player lair right after you posted this … so I rocked the punch … it was perfect to welcome in the spring and a huge hit! #EverybodyGotPunched. Keep it up … I’m LOVING everything you guys post and checkin’ in all the time. I gotta be careful tho … y’all might make me and alcoholic lol

This is a beautiful punch- I love the color and the flavors sound so lovely. Perfect for spring/summer gatherings!

Mmm, fresh strawberries … great refreshment for my next party 🙂

I love Pisco, it’s like a smooth rum and it goes great with lime and other fruits. This drinks sounds perfect! Thanks for the step by step directions too, very handy.

Honestly… Super Yum!
Your pictures are soo pretty that make me wanna try everything 😉
xx
Novella

My Chilean relatives love their pisco. I’ll try this recipe next time they visit, thanks.

This looks really delicious and the presentation is great. I’m definitely gonna make this for my next themed party.

Every time I see a cocktail on here I want to make it. Immediately. This makes me want to buy a punch bowl and throw fabulous parties.

yum, I love pisco! Sounds like a great punch, I’ll have to try it.

Looks lovely. The styling is beautiful! The color of the drink is such a pretty, orangy, coral. I’m a sucker for anything lime. The strawberry simple syrup looks easy to make as well.
xo Quinn
Quinn Cooper Style