Testing new cocktail recipes isn’t nearly as exciting as it sounds. Especially considering that I tend to recipe test in the morning. The last thing I want/need to be doing is drinking alone at 9am. What might seem like an entertaining day at the office can quickly transform into me drooling on the living room floor in front of Family Feud reruns. [Side note: I’ve been watching Family Feud since the Ray Combs days, and I have to say Steve Harvey tops my list of hosts – yes, including Richard Dawson. Don’t even get me started on Louie Anderson.] 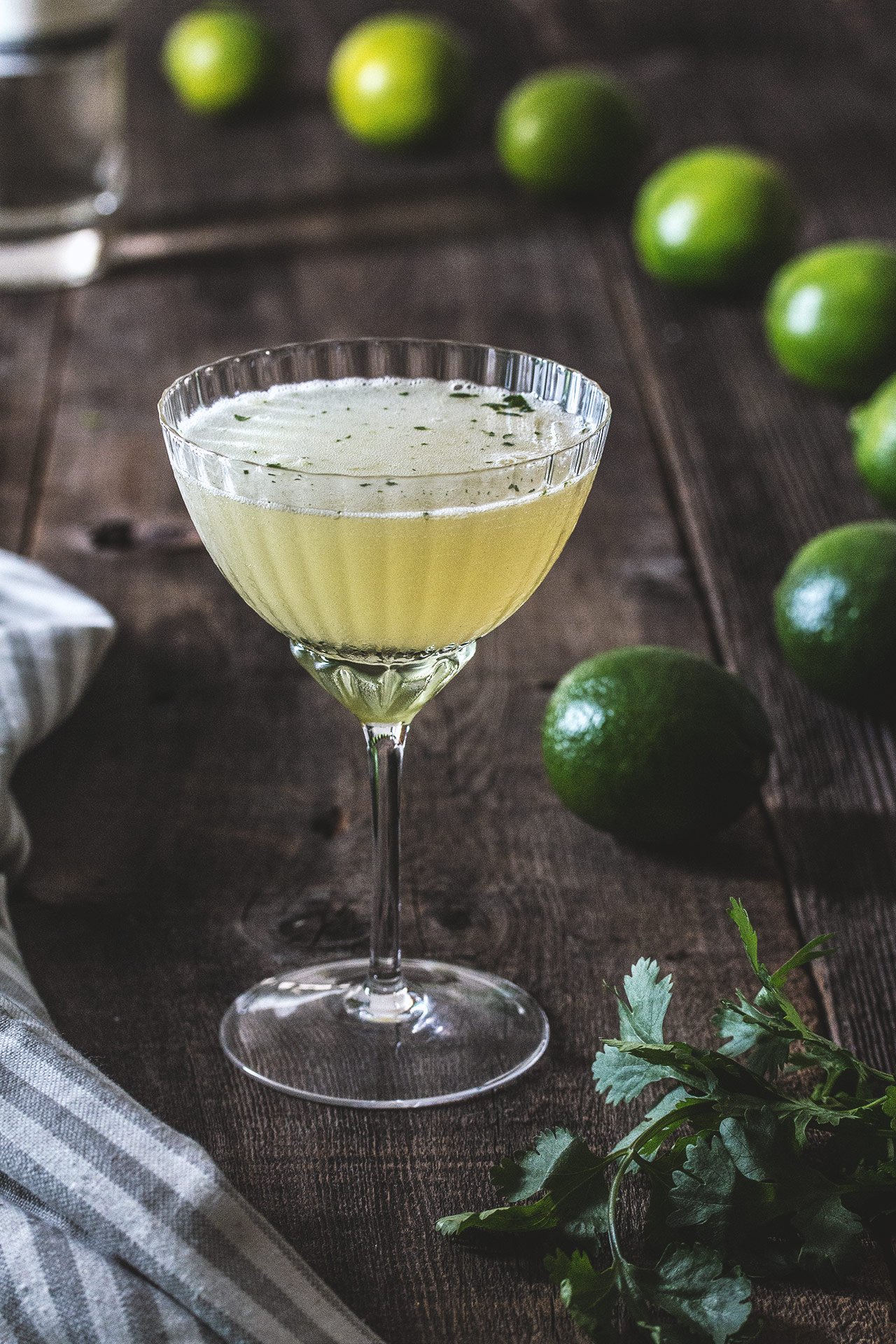 That said, it’s inevitable that after a while my palate begins to tire. Whether it’s the acid, the sugar, or ultimately the alcohol, I often don’t trust my tastebuds by the end of the day. Audrey to the rescue!! Not only does she have a remarkably discerning palate, but she happily welcomes a freshly shaken beverage after work – a luxury I had to live without during her pregnancy. No bueno! So, when I handed her my latest concoction, and she promptly declared it one of the best cocktails she’s had in years, I took notice. The star of the drink is certainly the St. George Green Chile Vodka. Each sip contains an insane amount of vibrant green chile flavor. Super compelling stuff!! For this reason, I wanted to pair with simple flavors that would keep the chile as the star, but subtly complement in their own way. Lately, we’ve been making a ton of dishes from Plenty, where mint and cilantro are often used in combination. Unfortunately, mixing herbs is less common in cocktails, yet thankfully was just what this recipe needed. I hope you give it a try, and at very least pickup a bottle of green chile vodka. It would probably make for a mean bloody mary. Just saying . . . 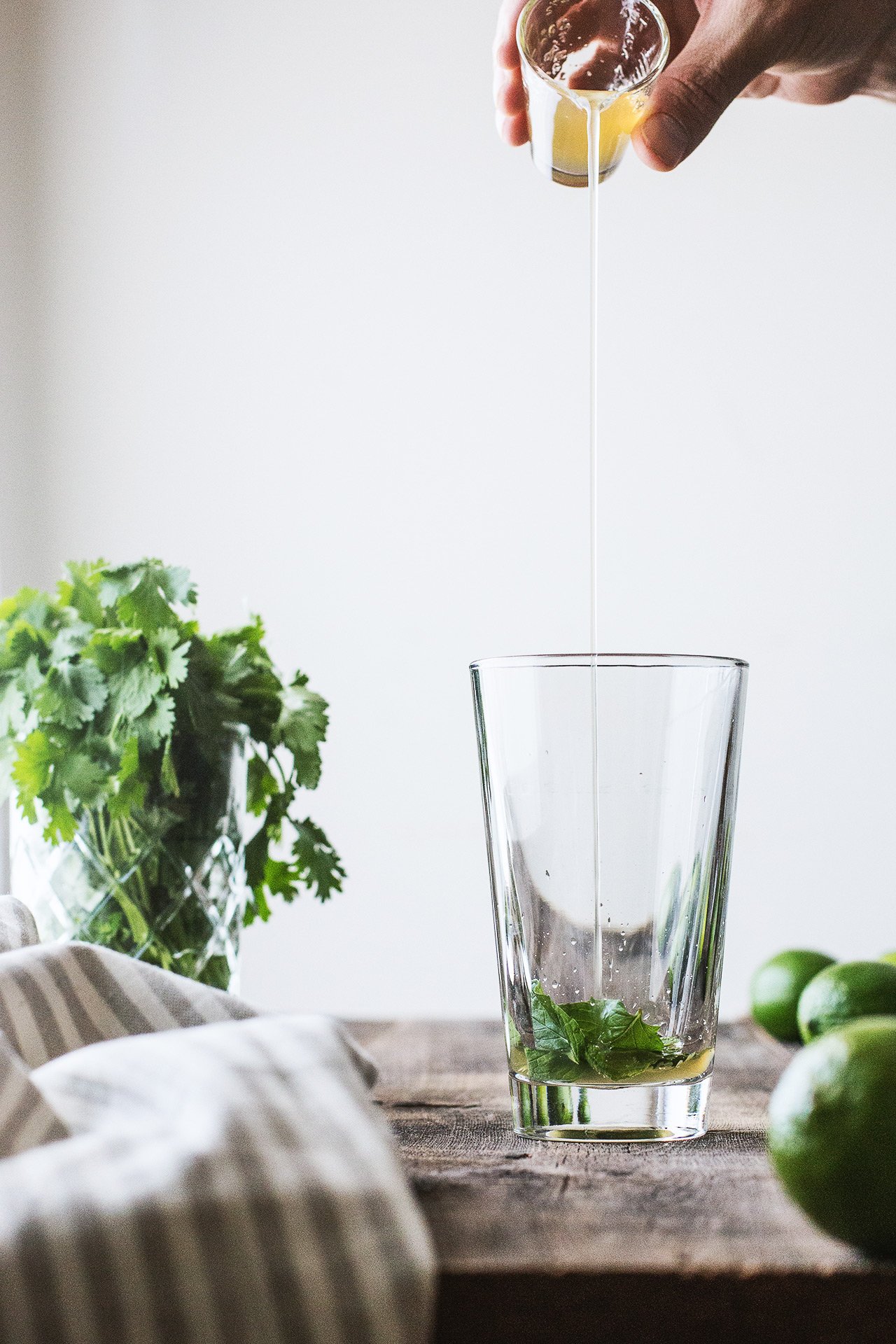 Each sip contains an insane amount of vibrant green chile flavor, subtly complemented by the herbs and pineapple.
Servings: 1 cocktail

WOW, another gorgeous cocktail! Where are those stunning cocktail glasses from?

Fab site! Love the cocktails and the beautiful photos. Where did you get those beautiful cocktail glasses?

Todd- I’ve never seen a citrus juicer like that. Where did you find it?

Hi Erin – It’s a vintage Vaughan citrus squeezer. I purchased it at the Alameda antiques faire, but if you can also find them for sale on Ebay and Etsy. Thanks for stopping by the site.

loving the use of mint and cilantro, gotta keep my hands on one of these!!

This looks PERFECT. So simple, beautiful, and vibrant. And Plenty is one of our favorite books to cook from as well. Such inspiring flavors!

My Friday so needs this cocktail! I’m loving the mint and cilantro for a fresh feel!

I love the combo of mint and cilantro, I also happen to love green chile and cocktails. WIN!

You are using the muddler upside down, drink sounds great.

Thanks for stopping by, Echo! You can actually use a muddler either direction. The end you’re referring to as the correct side has jagged teeth on it. While that’s handy for breaking down fruit, sugar cubes, or crushing ice, it’s actually too harsh for using on herbs. Thanks for the suggestion though.

September/October in the Bay Area usually means high temps, bright sunshine and the need for refreshing adult-beverages. This sounds incredible! I’ve been keeping a bottle of St.George Green Chile Vodka in my freezer lately and darn, if this just doesn’t scream make/drink me, I don’t know what does. Amazing photos, Todd, as always. Love this!!