Inspired by the most recent West Coast heatwave, I was craving a drink that would both standup to the scorching summer heat, and make for a tasty late night treat. Plus, is there anything that goes better with hamburgers than a good old shake? And you know me . . . I had to mess around and make it a boozy shake. When I was thinking ice cream flavors, I immediately thought Bi-Rite Creamery. They make an unreal snickerdoodle ice cream called Ricanelas, from which this recipe is adapted. I like a little texture in my shakes, so I also made some toffee bits for crunch. Oh, and did I mention the bourbon? 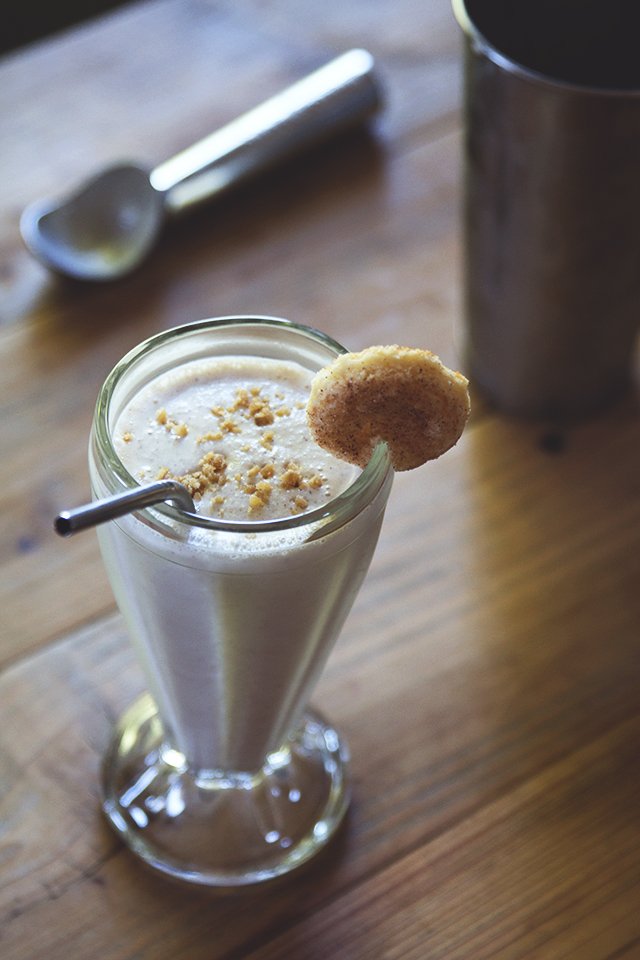 For the cinnamon ice cream

For the toffee bits

For the cinnamon ice cream

For the toffee bits

Red Robin makes a Cookie Magic milk shake … made w/crushed Oreos and a shot of Bailey’s! So good!!!
I’ve made a chocolate shake w/Bailey’s and also in hot chocolate!!

You are an evil genius. Bi-Rite, eat your heart out.

I am thinking a Boozy Snickerdoodle Shake at the end of the day might be the perfect reward for getting through a Monday.

I… I can’t even right now I want to bathe in that. Or have a glass. Whichever comes first.

^^takes IT to a whole nother level that is 🙂

Hey! This looks truly UNREAL.. plus the name takes to a whole nother level!

YES!!! I just made a boozy shake a few weeks ago- a boozy creamsicle shake. But this sounds so good. Snickerdoodles are my absolute favorite cookie and putting that flavor into a shake sounds amazing! I’m not even sure I should try making this because I might not be able to stop…

OMG I NEED THIS NOW! Amazing <3

Oh my, my, my. What a wonderful way to ruin my wedding diet. Totally loving this and currently looking up ice cream maker attachments for my Kitchen Aid… I love this post!

Love it. I always advocate the use of cookies in ice cream so this comes as a very pleasant surprise.

Hi Todd – what a gorgeous site, with beautiful photography. Clearly, you know how to make all sorts of serious drinks. You’ve got me thirsty and hungry at the same time now. This really does look amazing!

This will go perfect with the starship burgers at my star trek themed party this weekend. Wow…can’t wait.

Oh my goodness. These look crazy-good! Can I have one right now? (My boss doesn’t get into the office for another 3 hours so he’ll never know!)

I love these photographs, they are wonderful. And great recipe too – thanks!