I’ve been on a coconut kick lately. I’m hooked on coconut water and obsessed with coconut jam. Naturally, I love coconut cake. This recipe is an adapted version of Ina Garten’s coconut cake recipe, which of course is amazing. I’ve made it many times and it’s always a hit. As much as I love coconut, I actually don’t really like the texture of sweetened shredded coconut so I’ve omitted it from the batter and instead brushed the layers of cake with a reduced coconut glaze. And lastly, this recipe calls for a cream cheese frosting, which is my absolute favorite. 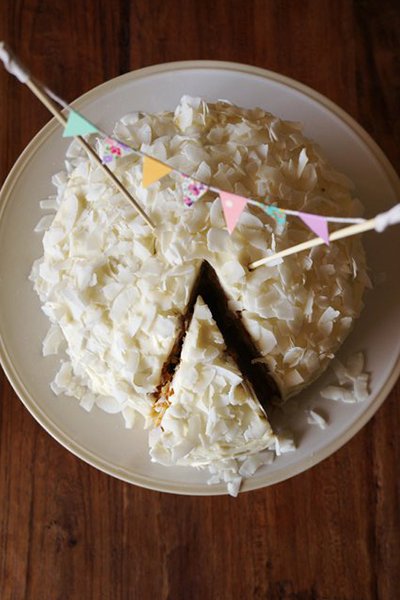 (all images by HonestlyYUM and recipe adapted from Barefoot Contessa)

Hii
I have a question, how to make the coconut shreds ?
Thanks *

I just bought them already shredded at the store.

Made the cake AND the bunting at the weekend! It was a real success, thanks for the inspiration 🙂

Your cake looks and sounds totally gorgeous! I really love your cake topper too!

What a gorgeous cake! I’ll take a slice, please!

Great idea! So simple yet gives it a cute festive touch

Hello!
This cake is a BEAUTY!!!
Did you use sweetened or unsweetened coconut flakes?
Thanks!
🙂

Thanks! I used unsweetened.

Definitely making this the next time I have an excuse to bake a cake!!! I totally agree with the coconut obsession!!

I love coconut, and although I’m really not much of a baker, I’m very tempted to try this. The photography is amazing!

This looks amazing! I mean, you can’t really go wrong with 3 sticks of butter and a bunch of coconut…right? I wish I had everything I needed to make this! It’s snowing like crazy in Denver right now and I am definitely not going out in it. Guess I’ll have to try it out another day!

YUM! I love coconut cake! These pictures are making my mouth water!